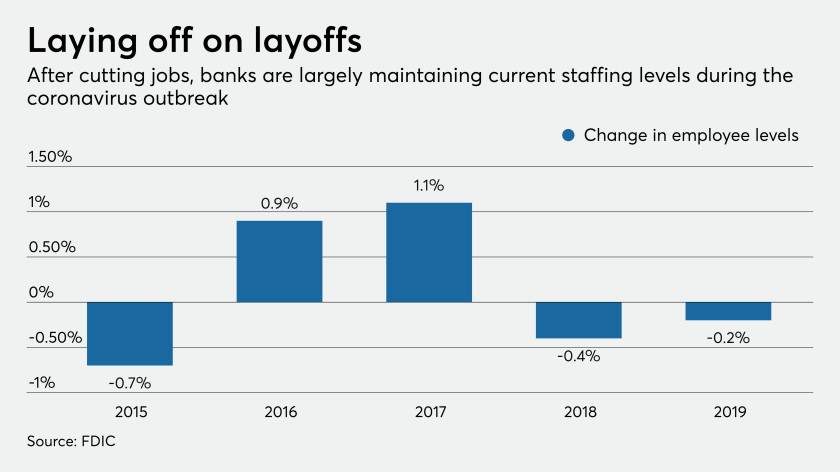 The industry, for now, seems intent to hold the line with headcount. Several banks have implemented hiring freezes and others, such as Bank of America, Citigroup and Royal Bank of Canada’s City National, have pledged to retain staff through 2020.

Some have cut back hours for some employees, while other banks are putting expansion plans on hold.

M&T Bank in Buffalo, N.Y., recently said it would delay the construction of a planned technology hub that will eventually house 1,500 workers.

“We’ll continue to push ahead once it is deemed safe and appropriate to do so, and we look forward to occupying the space later this year,” said M&T spokesman David Lanzillo.

The overall impact on employment may be unclear for a while. While the Federal Deposit Insurance Corp. shares headcount data after compiling disclosures in quarterly call reports, banks with less than $1 billion of assets will get a 30-day reprieve from filing those documents.

The banking industry trimmed payrolls by 0.2%, or roughly 4,000 jobs, in 2019, according to the most recent data compiled by the FDIC.

But the coronavirus response is dominating the daily lives of most bankers, forcing most to postpone, or at least de-emphasize, longer-term staffing decisions.

While Truist Financial continues to plan for an innovation and technology center in Charlotte, N.C., the company is largely focused on supporting clients, employees and communities, spokesman Kyle Tarrance said.

Truist has been hiring mortgage lenders in the wake of the Federal Reserve’s emergency rate cuts, CEO Kelly King said at a recent conference. Tarrance said the company is also filling technology posts.

Most banks are at a stage where they are determining what openings must be filled and which ones can remain vacant, said Carll Wilkinson, a managing director at Smith & Wilkinson.

The $2.3 billion-asset National Bank of Indianapolis has decided to hold off on hiring, said President and CEO Mark Bruin. A decision to revisit the issue will depend on how long the crisis lasts.

The $18 billion-asset Ameris Bancorp in Moultrie, Ga., is engaged in limited hiring, but that is subject to change depending on the longevity and severity of the pandemic, said CEO Palmer Proctor.

Any hiring decision will center on how vital the role is to operating a bank during the current crisis, industry observers said.

“If you need a CEO, CFO or chief risk officer, you’re going to fill that position,” Wilkinson said. “It is mission critical.”

Other roles being filled are IT jobs, including cybersecurity, and lenders skilled in loan modifications, said Rod Taylor, CEO of the executive search firm Taylor & Co. It has been more than a decade since loan mods were commonplace and many of those bankers have retired or left banking.

Banks are increasing their use of conferencing software to vet those candidates.

Wilkinson said almost every interview he has arranged in the last week has involved videoconferencing.

Many bankers and recruits are fumbling their way through the process, adjusting to lags and missed cues, said Anthony Colaguori, a recruiter in Pittsburgh. One-on-one conversations work best, he said.

“It has been an incredibly rapid switch, and there’s a little bit of a learning curve,” Wilkinson said.

“What will be fascinating to watch over the next few months is whether some companies transition to hiring virtually with no in-person interaction,” Wilkinson added. “Some are already talking about it.”